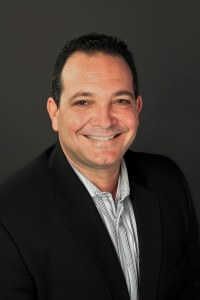 As President and CEO of M Bar C Construction, Jason Ianni holds a 27-year long presence within the M Bar C organization. Although today you can most often find Jason within the walls of our San Marcos Campus, a desk is a very different setting than the start of his employment. When Jason began at M Bar C organization, M Bar C was known as M Bar C Carports. Mike McReynolds established M Bar C Carports in 1978. M Bar C Carports specialized in small-scale covered parking and later expanded into larger structural steel canopies, lunch shelters, and carports.

“In 1993, my girlfriends (who is now Jason’s wife, Shauna Ianni), dad, Mike McReynolds (M Bar C Carport President and Owner) asked me if I wanted a summer job. I thought, ‘sure why not’? I spent the summer as a laborer working for Mike Prescott in the field. I felt that I was good at this. I felt as though it came easy to me. I just kept asking questions and learning from Mike Prescott and Mike McReynolds. At the time I thought, this was a temporary opportunity, I assumed I would go into concrete or framing, as many of my family members had done. After a while, I realized, I’m good at this. I can do this. So, I stuck with it.”

When asked about the various roles that he has assumed at M Bar C, Jason’s position history is a clear line of experience paired with development. Jason has held the following roles: laborer, ironworker, operator, foreman, superintendent, project manager, estimator, and material ordering. This wide range of roles speaks loudly to Jason’s familiarity with M Bar C and the entirety of its processes.

Around 1998 a client approached M Bar C Carports inquiring about a carport that was a totally new concept for the industry. Jason remembered, “the client shared with us that in Europe, people were putting solar on carports, and he wanted us to help him do it here.” Jason continued, “Mike McReynolds heard the client’s request and said yes. This was a new design for us. Mike McReynolds, Mike Prescott, me and a couple of other key players worked on a design that would meet the client’s requests. Together we created a solution, and for the first time, we put solar on top of a carport.” This innovative solar project was located at the Santa Monica Civic Center in Los Angeles and was present for the facility hosting that year’s Oscars Awards Ceremony. 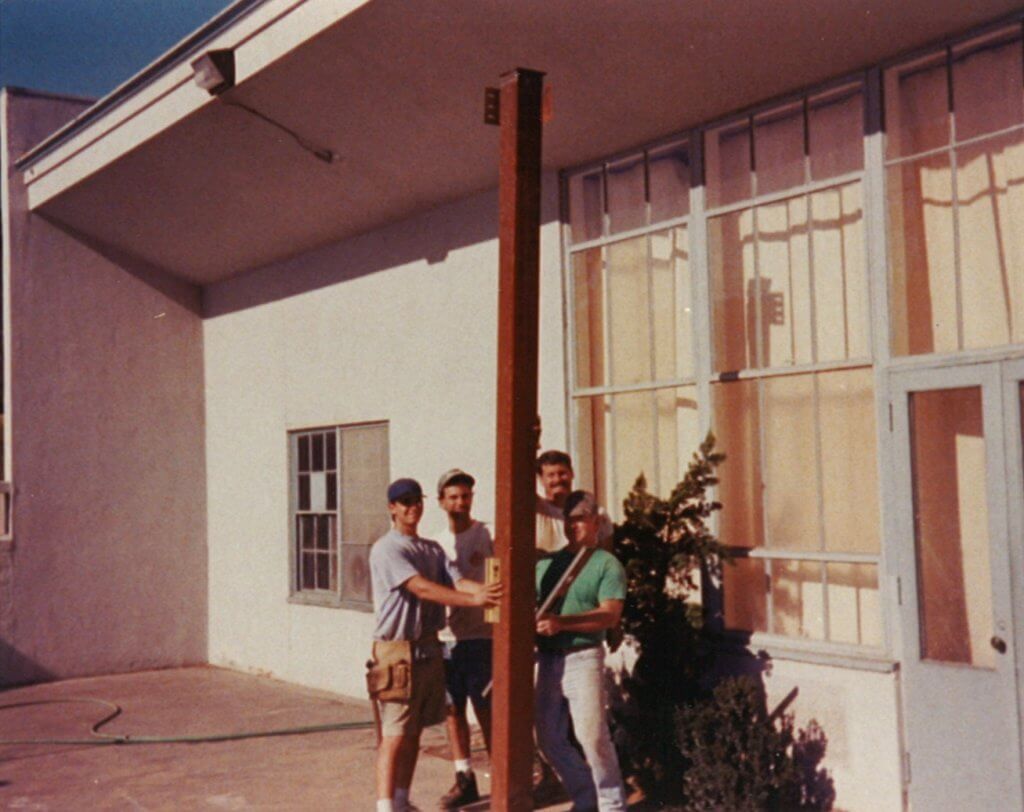 Over the years, new solar options grew rapidly, soon after Coronado Naval Base and Cal State Fresno solar carport projects followed. Jason recalled “these projects were what put M Bar C on the map. From there on everyone knew who we were and what we did. During this time, we didn’t even have much competition. It was just us and one other company doing this, we just went gangbusters as THE solar carport company.”

With this innovation, increased growth was inevitable for M Bar C Carports. In 2004, M Bar C Carports was growing at such a rapid pace and the demand for quality carports was apparent. Still, after decades of hard work, M Bar C Carports Founder and President, Mike McReynolds found himself looking for an opportunity to pass the torch of his ever-growing company. Jason recalled:

“My father in law, Mike McReynolds was acting President, and we were growing at a pace that he hadn’t envisioned continuing at. He approached me and said ‘hey, this is as far as I see myself going in growing this company. I want to begin a plan to phase out.’ I remember us discussing and agreeing on a plan for how I would proceed with purchasing M Bar C Carports from him.”

This transition included a shift in not only ownership from Mike McReynolds to Jason Ianni but also a change in business name from M Bar C Carports to today’s all-encompassing name M Bar C Construction.

Jason recalls that although in 2008 the economy was struggling, solar incentives and rebates were peaking. This peak provided M Bar C Construction the ability to install solar carports and thrive despite economic challenges. Because of this growth, M Bar C Construction was able to enlist skilled staff members that would later play a large part in the current success of M Bar C. “When I first started at M Bar C Carports, we were working out of a house. The pool table was our plan table. We eventually grew to multiple people. In 2005, with the creation of M Bar C Construction, we moved into a 6000 square foot office building. We then were able to increase staff and then take on more projects. This expansion allowed us to bring on key team members, like Erik Krivokopich as well as others, collectively these changes ushered us into notable growth.”

Over the last 27 years not only has M Bar C Construction developed, but Jason Ianni has also grown and developed as an individual. In 2013, Jason Ianni was recognized with the Californias Small Business Person of the Year Award. This award recognized the notable development of M Bar C Construction at the leadership of Jason. Jason explained “The best thing I’ve learned was to surround myself with smart people. I try to learn from everyone else around me. I’ve learned to seek wise counsel, consider their opinions and experiences, filter them against my own, and then make a decision.” Another key lesson that Jason has gained from his experiences at M Bar C Construction is the art of risk. “I have a pretty high tolerance for risk. I’ve learned that if you take risks, sometimes you succeed, but if you don’t, you learn and then rebuild.” 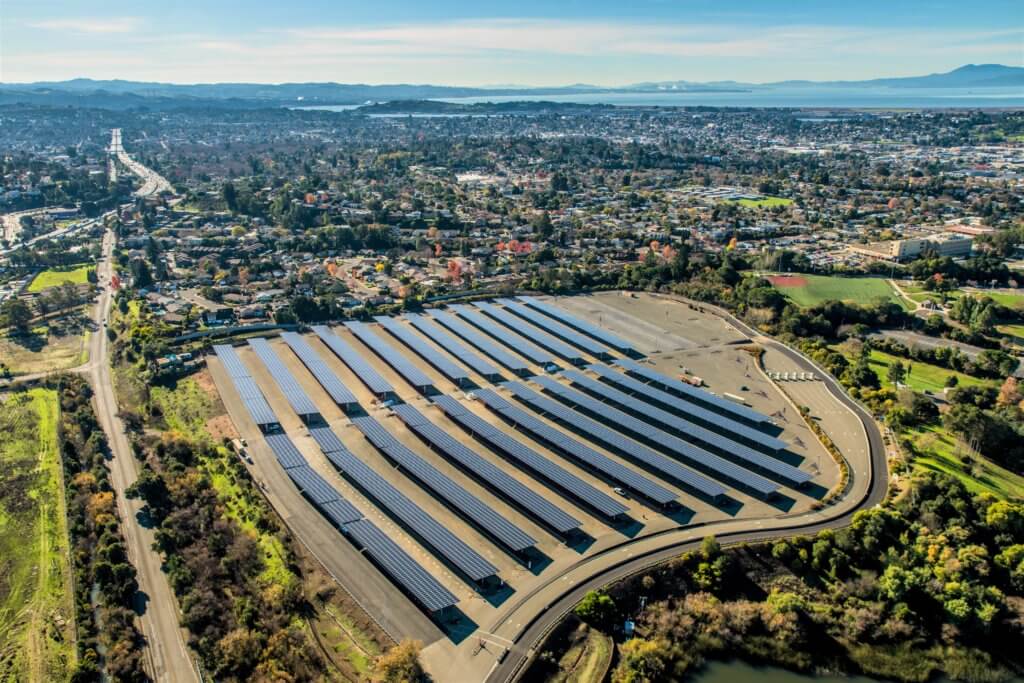 Regardless, of geographical reach and company growth, that’s not all that stands out to Jason; “My favorite part of my job is watching employees and their families grow and become stable. I’m happy watching our employees get married, have kids, and grow as a family.” Within the context of business development, Jason still enjoys the process involved with providing a solution to our clients. “I also enjoy growing our business. I like finalizing contracts. It’s a fun thing for me, it gets my adrenaline going. I enjoy negotiating contracts. I enjoy going back and forth over prices and details. Knowing we were awarded the project is still fun for me.”

When asked about his favorite M Bar C projects, for Jason the projects close to home are the ones that stand above the rest; “Seeing our carports within our hometown at the San Diego International Airport and the San Diego Zoo makes me proud. It’s nice knowing that so many people see them every day. Getting to see our solar carports within the Vista Unified School District and San Marcos Unified School Districts also makes me really proud.” 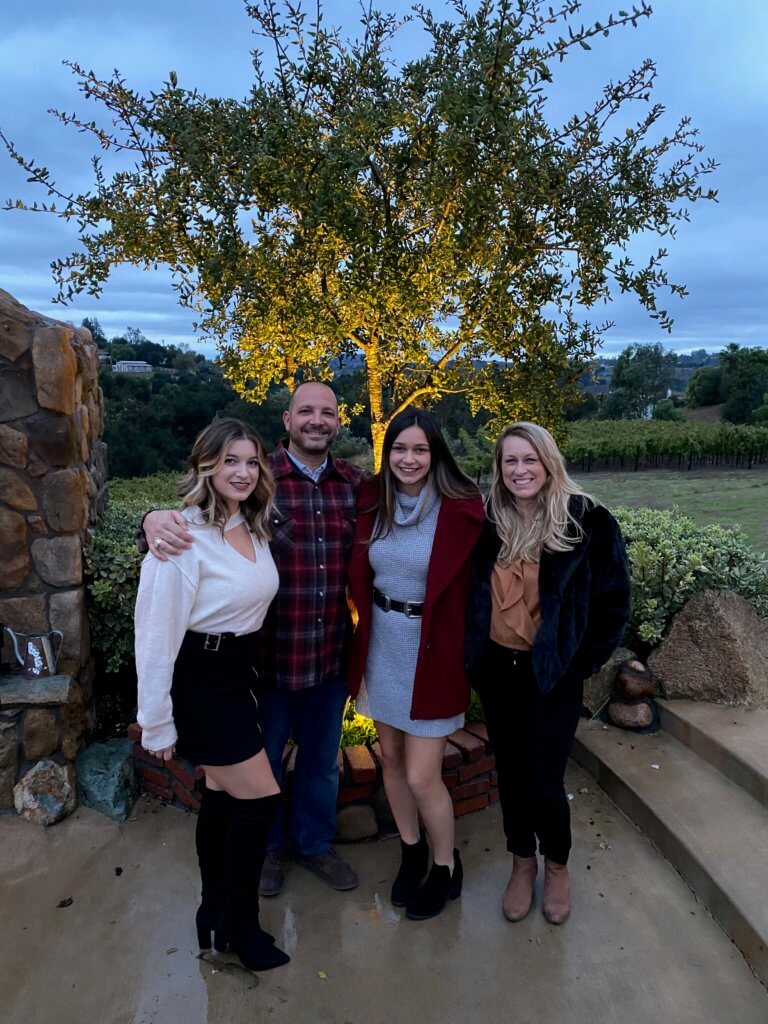 Looking into the future of M Bar C Construction, Jason believes the best direction of M Bar C is driven by what is most beneficial for the entire company. With a shifting economy and varying policies, Jason believes that whatever direction proves to be healthiest is about more than one specific ambitious business goal. For Jason, the future is about what’s best for the individuals that make up M Bar C. Jason explained: “I want the company to be successful, and I want us to go where the path leads us, while also preparing for the next steps.” More specifically, Jason believes there’s an opportunity for growth within the East Coast region, “Our office on the East Coast is an exciting opportunity. I do see, in the upcoming future M Bar C as a recognized and established presence throughout that region.” Jason also recognizes the importance of diversifying the products and services M Bar C Construction offers, “It doesn’t hurt to always try and be the best we can be within multiple facets.”

Jason Ianni acknowledges that the support and sacrifice of his family played a large part in not only his success but the growth of M Bar C Construction as a whole. “There was a time where I was working all day in the field and then all night long in the office. I was traveling so much, my wife Shauna was raising our daughters on her own. There were times that she felt as though she was a single mom.”

Although it still proves challenging for Jason to step away from the office, part of his growth has been recognizing when he needs to regroup with his family. Jason, his wife Shauna and their two daughters, Bella and Angel, enjoy traveling throughout the world, camping, skiing and participating in local community groups. You can bet that Jason and Shauna’s favorite trips revolve around their daughters. Jason enjoys taking on the ski slopes with his eldest daughter Angel or exploring Italy together. Jason doesn’t only travel to the east coast for work. Now that his youngest daughter Bella is a freshman and a player on the University of Massachusetts Field Hockey Team, you can find Jason and Shauna cheering from the sidelines.

“Throughout the years, I’ve come through a lot of different challenges to be where I am today. I’ve worked very hard to earn ownership of M Bar C Construction, but also develop it. I’ve taken on a lot of risk for M Bar C Construction. But it’s important to me to do that, not only because we want to make a profit, but because M Bar C represents individuals and families.”